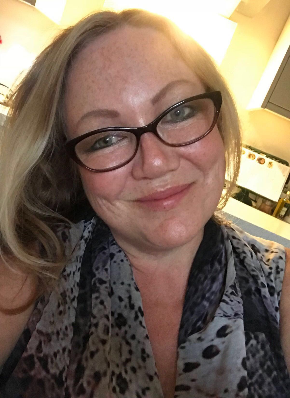 Writer based in York

After working as a lumberjack in Wales and Teaching English as a Foreign Language on Crete, I was swept off as a GI bride to Baltimore in ‘93.

I returned to Britain in 1999 and went on to take an MA in Screenwriting at the Northern Film School in Leeds. I graduated in 2001, with an agent.
The first short I wrote, ‘Wolf in an Aran Sweater’, swept the board at the Fujifilm scholarship awards 2000, and got a cinema release alongside de Nero’s ‘The Score’.

In 2002 I was selected for Arista Adept – a 9-month program of script development. I worked with Stephen Cleary.

In 2004, I was picked for the Moonstone screenwriting Lab. My tutors were Walther Bernstein and Troy Kennedy Martin.

I wrote, starring Mark Benton, It was selected for Soho Rushes and BAFTA long-listed that year.

Very Heaven on Vimeo did the festival circuit. It screened at Kino and Bradford.

At present I’m developing a dystopian rights-of-passage feature film called ‘Blight’ I started on the producers’ workshop of EAVE 16.

The following year ‘Blight’ got shortlisted for I-Features.

This past year I got shortlisted for the C21 competition and put forward for BBC Northern Voices by Alice Ramsey.

Phil Shelley also selected me for a spot on his mentorship programme. I’ve been working with Joe Williams (script edited ‘Keeping Faith’, ‘Lupin’ and ‘Criminal’)
on a TV eco-thriller for 12 months. ‘Black Fish’ is about the murky world of fish laundering in Grimsby.